Today, we are previewing a new public market index – the MAD (for machine learning, AI and data) index.

Readers of this blog know that we have been tracking the data ecosystem since 2012, through annual landscapes (see the 2020 Data & AI Landscape).

Over the last few years, a funny thing happened – some of the small startups we had started tracking grew up, did an IPO and became large public companies.

Not so long ago, public market investors used to say there’s was no good way of “playing” the Big Data and AI trends, due to the lack of public companies in the space. This is less true today.

However, there isn’t much out there in terms of looking at those public companies as a group. For example, see this Seeking Alpha piece, Top 3 Artificial Intelligence ETFs To Consider, where none of the companies listed are actually AI companies.

Hence the idea of the MAD Index. It’s still a small group of companies, but my colleague John Wu and I were curious to see how they fared in public markets, now and going forward.

This is just a start. We anticipate that a number of companies will join this group in the next year or two, and we’re excited to see how this index matures.

Now, the hard part. How did we go about selecting companies to include in the MAD index?

Our philosophy here is to cover companies that are as close as possible to “pure” data or ML/AI, which of course is a fuzzy concept. Our North star is that data or ML/AI should be the the essence of what those companies do, as opposed to an ingredient in an overall mix – otherwise, we’d end up with a very long list of companies (our fundamental thesis on the space is that every company will eventually be a data and ML/AI company).

In practice, that means: infrastructure companies directly focused on the processing of data and the creation or enablement of ML/AI, as well as a few broadly horizontal companies at the application layer.

Conversely, the following types of companies were excluded:

Here’s our initial list of 13 companies in the MAD Index, as well as some key metrics:

Nearly all the companies in this list went public within the last 5 years. Both the median and average listing years were 2017.

The most recent public additions are C3 (debuted in December 2020), Snowflake, and Palantir (both September 2020).

However, particularly given the relatively small number of public data and ML/AI companies, we decided to include some relatively older players like Teradata (which went public in 2007) and Splunk (2012).

The group of relevant companies will evolve over time – for example, both Couchbase and UiPath have filed to go public. As more companies join the MAD Index, we may consider focusing this index on more recently IPO’ed companies only.

In the meantime, there’s a reasonably wide spread within the MAD index, across three groups of companies:

As one would expect, this is a high revenue growth group on the whole, with Snowflake leading the pack at a blistering pace of 124% YoY.

However, Splunk and Teradata are experiencing slight year over year revenue contraction. Launched before the cloud wave took place, Splunk is making the transition from on premise installations and perpetual/term licenses to a cloud-based subscription model. Teradata, which has continually reinvented itself since being founded in 1979, has seen a slow revenue decline over the past few years, as cloud data warehouse providers have gained market share.

Growth and LTM revenue multiple are directly correlated for companies in the index.

Trailing 12 month (LTM) revenue multiples have largely rewarded the fastest growing companies within this subset – all companies growing over 25% YoY are trading at over 25X LTM revenue with the exception of Elastic, which is trading at 17.4X with 44% YoY growth.

Snowflake is the outlier for both growth and trailing multiple, growing at over 100% a year while valued at 52X. 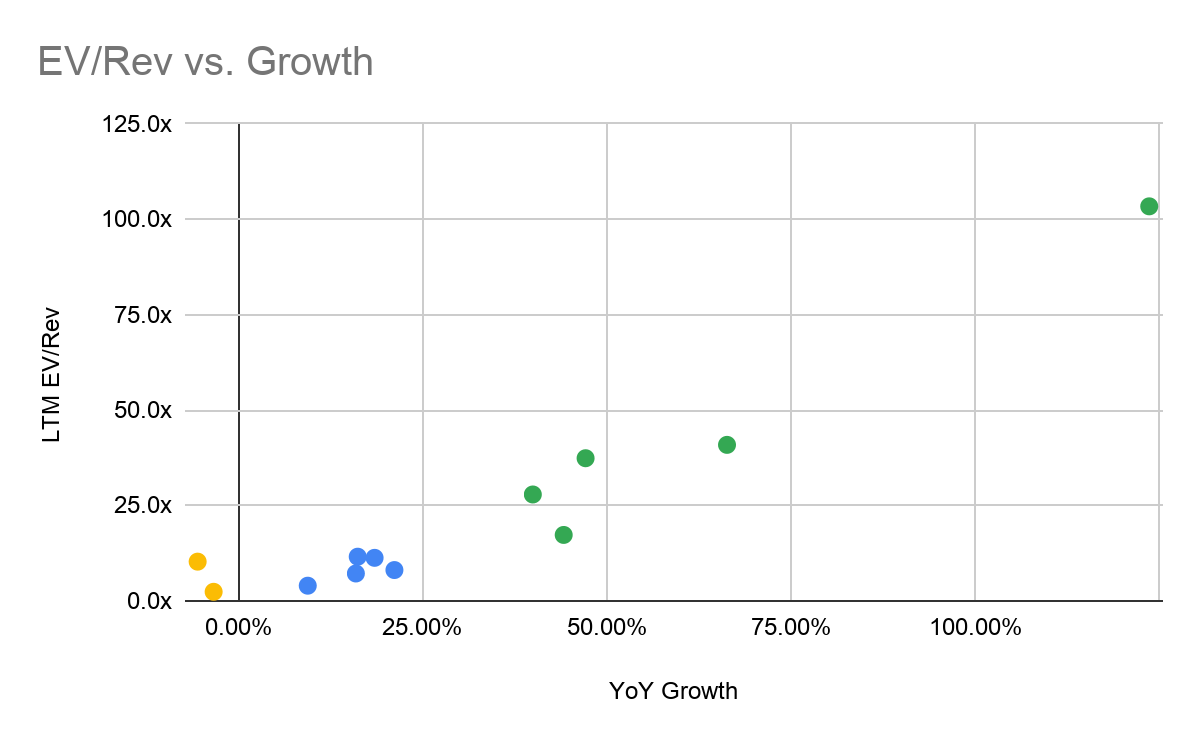 Even weighted down by a couple of older companies, the MAD index outperformed the major indexes over the last five quarters, beating Nasdaq gains by 47%, the S&P gains by 219%, and the Dow Jones gains by 347%.

However, in the recent market drawback, these companies also experienced the most losses from their historical highs.

It is likely that data companies will continue to outperform the market, given the lack of maturity in data infrastructure outside of the most technologically forward companies.

It’s still early days for public data and ML/AI companies as a group. We are just at the beginning of this trend playing out in the long run.

We expect many more companies to join the group. Most of these companies are still early in both product and commercialization. We are planning on tracking them through another list, our Emerging MAD Index, coming up soon!

This MAD Index is a work in progress, and comments are certainly welcome.

Disclaimer: All of the above is something we wrote because we are passionate about the space — this not investment advice!